Type your search terms above and press return to see the search results.

Went to a picture show at the Y.M.C.A hut tonight, pictures were so small couldn’t make much out of them. Some of the soldiers put on a good sketch. Another big Division maneuver yesterday but I had plenty of work to do at the office so did not go. Rained all day and they were a wet and tired bunch when they came back. 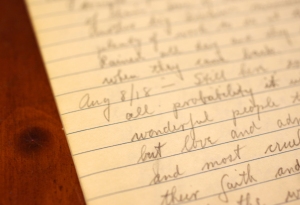 Still here. Expect our orders any day, and in all probability it will be up front somewhere. What wonderful people these French are. One cannot help but love and admire them. Four years of the hardest and most cruel war in history has not weakened their faith and loyalty. And these women of France, what the world owes to them nobody will ever know. It is they who have made the war possible for they have taken up the work where their men folk left it and now work from early morn to late at night, in the fields and in the shops. Everywhere one can see old Grandmothers, bent and wrinkled who look as if they had toasted by the fire for years—but they too are bravely doing their part.

And they call this all war. Damn the Huns.*

*It is common in war for men to dehumanize and revile the enemy, but there’s little evidence Cap carried any contempt for the German people into his later life. This was confirmed in person by my grandfather, John Hill.

We move tomorrow, received orders late today and maybe we haven’t been hustling. It’s a tremendous job, don’t see how we can make it but orders must be obeyed in this man’s army. Don’t know where we’re going but only that the whole Division moves by motor trucks at nine in the morning. Suppose it’s to the front. Hate to say farewell to the madame.

“Hate to say farewell to the madame.”

Well, here we are located in the little town of Fremifontaine about 12 miles behind the St. Die sector front lines. The colonel, Capt. Sweitzer and myself came up in the Colonel’s car, arrived about 4 p.m. yesterday. It was a beautiful trip thru mountainous country. The last of the auto trucks arrived with our troops this morning. It took about 800 trucks to move the Division. Sweitzer and I located a billet over the only store in the little town. Right attractive little girl in the house but our room is not much like the Madame’s  in Serqueux. Comparatively small and poor town. 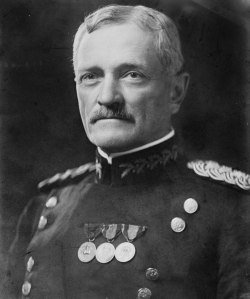 Capt. S— and myself were alone at Regimental HQ this afternoon. Two big cars drove up and much to our surprise General Pershing and his staff were in them. The Colonel being absent we had to answer questions of the General and his staff. He had inspected me of our companies and was apparently getting a general impression of the whole outfit, no doubt looking us over to see if we are good enough to go up front with the rest. He was apparently very pleasant, my first chance to get a glimpse of four stars.*

*Cap’s discharge papers from March 1919 were signed by then Major General (two stars) Omar Bradley, one of nine generals in U.S. history to receive a five-star rank. That promotion wouldn’t come until 1950.

Second and third Battalions are billeted in Grandvillers, 5 kilometers away. Went over there today in the side car, much better town than this. We located our office in the village school room, school being closed for the season. We can hear the big guns plainly and there is plenty of aerial activity.

“We can hear the big guns plainly.”

A typical motorcycle of the period.

There is a little stream of water that runs close by this town and I availed myself of the opportunity, and Capt. McCarty and myself went in the side car to take a swim. Best bath I have had in France, which isn’t saying much. These people here in France bathe twice a year and then only with the corner of a towel, absolutely no bathing facilities. Some of the fellows have learned the trick of washing their teeth, shaving and washing their hands and face in a pint of water, but I am not that acclimated as yet.

We have established the colonel’s mess in the only public drinking place in town, so will have to be content with the eau* that runs down from the hills.

Went to Bruyères today in the side-car where Division HQ is temporarily located. Beautiful ride over wonderful roads.

Night before last we had plenty of excitement, a big city close by was bombed. It was a beautiful moon light night, ideal for aeroplanes to work. S— and I were out about nine p.m. when things were just opening up. To the north we could hear the distant bombing very plainly. The flare rockets were being sent up in all sections of the sky and the shells from our Archie’s* were bursting all around the Boche planes. A truly remarkable sight.

Spent a few minutes today attempting to talk French with the little girl in the house. I simply can’t do any good with girls that I can’t talk to.

Rumors that we will leave tomorrow will not be sorry as this is a miserable town. Been hearing today of the big allied offensive that is on and the wonderful fighting our boys are doing. Wonder if we will be up with them soon.

Received our orders to move on the 21st and left Fremifontaine at about 4 p.m. The Regiment marched all that night and arrived at La Voivre and other nearby towns at about 5 a.m. The Colonel, Capt Forteau, S— and myself rode up in the car and arrived in time to snatch off a few hours rest. This is the prettiest country we have been in yet. The town itself is located in a beautiful valley surrounded on all sides by picturesque mountains. The town and entire valley was occupied by the Huns in 1914 and the results of their occupation can be seen on all sides. The church is about the only building without a shell hole in it and numerous houses have nothing but the four bare walls standing. We are now 5 miles from the front lines and under direct observation of the Boche’s O.P. 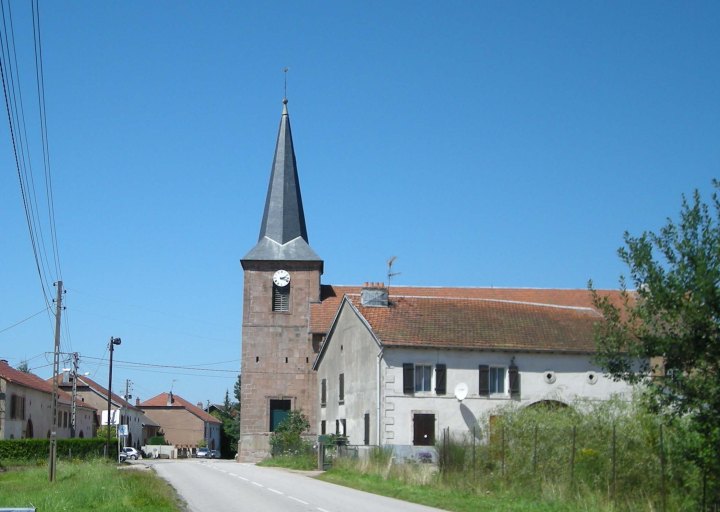 The Church of the Assumption in La Voivre, France.

Have been made mess officer of the Colonel’s mess and am busy trying to get something to eat. Have established headquarters in an old building on the hill, once occupied by the mayor of the town who was ruthlessly murdered by the Boche upon their invasion. Rumors that we will leave tomorrow for the front to relieve a French Division now in the trenches. Had our first casualty today, soldier killed by shell fire when our supply train was shelled by Huns.

“Had our first casualty today.”

We left La Voivre yesterday for Denipaire which will be our Regimental P.C. while occupying our sector. Coming up, the road was heavily camouflaged on both sides, it being under enemy observation most of the way. Denipaire was once a pretty little town but is all shot to pieces now. Got in late but managed to get a billet over the little old telephone exchange, shell holes through the house in several places but at least quite comfortable. After getting a bite to eat, Capt. Forteau, Capt. Evans, the new medic, and myself took a walk up toward the trenches, did not realize that it was our main line of communication at the time. The road was lined with dugouts of all descriptions, heavy concrete affairs 75 and 100 feet back into the hills, others of wooden frontage with large verandas and finished in such a way as to remind one of the summer cottages. One would marvel at their interior furnishings, sometimes three and four rooms neatly furnished with a real bed, wash stands, mirror and the like. We had returned only a short time when Heinie* opened up with his heavy artillery and I had my first experience of shell fire. It is an experience that one cannot well describe. You hear the boom of the distant gun then the rushing whine and screeching of the shell as it passes, then you wait for the terrific explosion wondering how far beyond you it will strike. It sure causes a weakness in the knees and a funny feeling up your back. The man that says he was not scared at those first shells he heard is either a damn fool or a liar. At this particular time they were shelling the roads beyond our town.

*Another derogatory term used for German soldiers during the war. Short for Heinrich.

Heinie has evidently got it into his head that there is an unwanted movement of troops, for he certainly has been opening up on this old place, starts in about nine and keeps it up all night, evidently wants to keep troops from moving up the roads—or—perhaps he wants to scare us and weaken our morale by spoiling our sleep—certainly has spoiled mine. How they do scream and whine and you just lie there wondering where the next one will land. Our Chaplain pulled a good one. Heinie opened up with the big boys, he was standing in the road with Bender: “Heaven is my home but I’m not homesick a bit,” he said and made for a dugout.*

“You just lie there wondering where the next one will land.”

* “Heaven is my home but I’m not homesick a bit.” —There’s something strangely prescient about the timing of this entry, given that August 31 was the date of Cap’s death in 1981. I’m not one to wax poetic about fate or prophecy—least of all would be Cap or any Hill I’ve ever met—and the very idea of an anniversary is, at best, arbitrary. But there’s something haunting about this passage. Likely, it means nothing—chalk it up to coincidence—but it’s a very intriguing coincidence, at that.